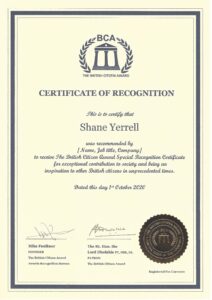 Each year The British Citizen Award (BCA) limits the number of medals it issues to individuals who have positively impacted society. Each medalist receives a Certificate of Honour alongside the medal. However, to reflect the exceptional endeavours of those who are not selected to receive the medal, The British Citizen Award issues a larger, yet still limited, number of Certificates of Recognition.

Since March 2020 we have seen large number of people being elevated into essential and key workers. These people have, since the pandemic first struck, made a herculean effort to keep the lights on, the country fed, people cared for, supplies delivered, and kept people safe.

The BCA is working alongside some of the country’s most  significant employers whose organisations have played a pivotal role during these difficult times. Whilst the organisations who have joined forces with the BCA believe their colleagues deserve a medal, BCA rules limit the number of medals which can be allocated. Therefore a number of British Citizen Award Recognition Certificates have been issued to recognise the extraordinary commitment of colleagues in the workplace.

If you have received The British Citizen Award Special Recognition Certificate it is because you made a significant impact in the workplace during these unprecedented times. You were recommended by your organisation who wanted to show how highly they appreciate your efforts. The British Citizen Award Special Recognition Certificate is issued to you as a mark of the positive impact you have made to British society through your work and you should be justifiably proud as the Certificate of Recognition is also limited, Congratulations